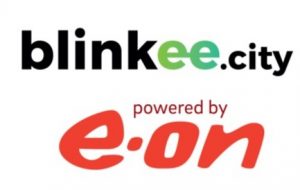 Blinkee.city provides a solution to the problems of an overcrowded urban transport, thus adds value to the people living there.

Blinkee.city Kft., a family owned hungarian startup, is the first foreign partner company of blinkee.city’s original brand owner. They all saw potential and believed in a model, that is based on technology development, that can substantially influence the future of transport, while promoting the use of environmentally-friendly vehicles. Blinkee.city’s hungarian team is open to novelties and innovations and is eager to face some challenges, moreover they are committed to provide added values for their city. The partnership with E.ON was born due to the common goals.

The keyless public electric scooter sharing system can be handled by a mobile application. After the registration, the user can select the closest available vehicle by using the application’s map. To use this service, it’s not necessairy to have a prepaid financial framework, it uses a per-minute billing method, moreover student discounts are also available.

The 100% electric blinkee.city scooters reduce the air pollution, urban noises, traffic jams, and create an accelerated, easier and more cost-effective urban transport. As the user can move anywhere in Budapest with a scooter and leave it anywhere in the city zone, the system also solves some parking problems.

A prerequisites for the implementation were the capital investments on funding the vehicles, and the provision of human resources required to run the operations. The preparation and implementation took 6 months. The most significant risk was the increasement of the user base, which greatly affected the utilization of the new vehicle sharing model, taking into account the fact, that the culture of riding a scooter in Hungary is not so advanced. Blinkee.city wants to form an integral part of the palette of public vehicle sharing systems, basically as a complementary service to the other models, and it is also important to integrate it into the metropolitan public transport in co-operation with the regulators.

E.ON has already been providing services related to e-transport for many years, not only by selling chargers, but also by carrying out implementations, ensuring continuous operations and distributing electricity. Supporting the blinkee.city is another major step in the path of promoting e-mobility.

The presented solution is the basis of the business model.

The pledge of the growth is the steady increasement of the number of registered and active users alongside the expansion of the fleet and the service area. Integrating rural cities into the system is an important part of the growth.

However, processing the vehicles’ rental data contains additional informations that are relevant to the public transport, which can later be used in order to develop more livable metropolitan concepts.

The targeted base which contains tens of thousands of users, can be reached by other business solutions.

Since introducing this service, in 2 and a half months blinkee-city has more than 7000 registrated users in Budapest. The daily number of uses grow continuously, which is 350-400 rent a day at the moment.